I Am Not Joey Pigza (Paperback) 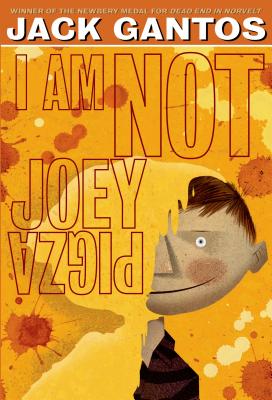 This is book number 4 in the Joey Pigza series.

Just when Joey Pigza's wired world finally seems to be under control, his good-for-nothing dad pops back into his life. This time, though, Carter Pigza is a new man – literally. After a lucky lotto win, Carter Pigza has a crazy new outlook on life, and he's even changed his name to Charles Heinz. He thinks Joey and his mom should become new people, too. Soon Joey finds himself bombarded with changes: a new name, a new home, and a new family business – running the beat-up Beehive Diner. He knows he should forgive his dad as his mom wants him to, and get with the new family program. But in I Am Not Joey Pigza, Joey is afraid that in changing names and going with the flow he will lose sight of who he really is.

In Jack Gantos' rocket-paced new chapter in Joey Pigza's life, a favorite hero discovers what identity and forgiveness really mean, and how to cook a delicious turkey burger. This title has Common Core connections.

“* Stands well on its own, though anyone new to Joey's saga will want to read more. This is Gantos at his best, and that's saying a lot. ” —Kirkus Reviews, starred review

“Joey steadfastly remains on his path of self-knowledge.” —VOYA

“Gantos is wise and subtle in his exploration of his hero's identity dilemma.” —The Bulletin of the Center for Children's Books

“Readers will admire Joey's genuine desire to make his parents proud and laugh at his zany perspectives.” —IRA

“Middle grade readers who know Joey will be happy to see his return.” —TeenReadsToo.com