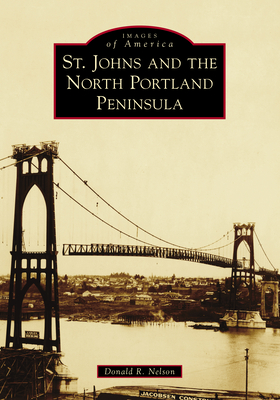 James John, the founder of St. Johns, settled on his land claim in the 1840s and was soon followed by others. Schools, churches, and stores were established, and industrial development followed. St. Johns was originally annexed to the city of Portland in 1891. Shipyards were developed in North Portland during World War I and World War II. Among the landmarks of the community are St. Johns Bridge and the nearby city hall building. Longtime businesses include Slim's Restaurant and Lounge, Peninsula Iron Works, the Man's Shop, and the Wishing Well Restaurant. Moonstruck Chocolate Company has been located in St. Johns since 2002. Well-known individuals, such as members of the Jower and Leveton families; Howard Galbraith, a founder of the St. Johns Heritage Society; and Walt Morey, author of Gentle Ben, have called St. Johns home. Today, St. Johns comes alive every year with events such as the St. Johns Parade, St. Johns Bizarre, and the Cathedral Park Jazz Festival. The recent influx of people of coming to Portland has influenced redevelopment within the community.